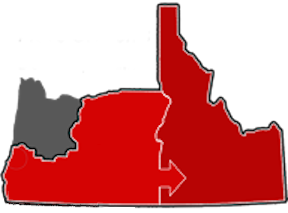 Join the movement to relocate the Oregon/Idaho border to make both states better.

Counties can become a part of Idaho.  State lines have been relocated many times in American history because it just takes an interstate compact between two state legislatures and approval of Congress.

If the United States were governed as a single state, we wouldn’t have the opportunity for state governance to vary according to the culture of a local area. The purpose of having state lines is to allow this variance.  The Oregon/Idaho border was established 163 years ago and is now outdated. It makes no sense in its current location because it doesn’t match the location of the cultural divide in Oregon. The Oregon/Washington border was updated in 1958. It’s time to move other borders.

Areas that vote like Idaho does, and are economically healthy enough to be welcomed by Idaho are: eastern, southern, and most of central Oregon, southeastern Washington, and northeastern California.

This proposal is different from creating a new state because it does not affect the balance of power in the US Senate. This means that it’s more likely to be approved by the Oregon Legislature.

Our proposal is a win-win for the interests of each state legislature, and for the counties that get to switch states.  Click the questions below to see why:

Why should counties want to become a part of Idaho?

1. American Values: Oregon will continue to violate more and more American values and American freedoms because northwestern Oregon has 79% of Oregon’s population. Fortunately, Boise has only 13% of Idaho’s population.

2. Law and Order: Oregon refuses to protect citizens from criminals, rioters, wildfire arsonists, illegals, and the homeless, but then infringes on your right to defend your family with firearms.  Idaho enforces the law.

3. Low Tax: Idaho is the state with the 8th smallest tax burden, and Oregon ranks 33rd, according to https://taxfoundation.org/tax-freedom-day-2019 . Combining all taxes together, including sales tax, the average Idahoan paid $1722 less in taxes in 2019 than the average Oregonian. That’s averaging together every adult or child, employed, retired or unemployed. Oregon tax rates continue to go up due to a lack of willingness to control spending.  And cost of living is much higher in Oregon than in Idaho.

4. Safety: Idaho allows forests to be managed to prevent destruction of housing from huge wildfires.

5. Thriving Economy: Idaho has less regulation than any other state, leading to low unemployment and a much lower cost of living. Idaho’s approach to regulation and taxation would allow our rural industries to revive and employ us again.

1. SAVE MONEY: In 2019, the average northwestern Oregonian wage earner subsidized eastern & southern Oregon counties by $382 per year, judging from income tax rates, plus $187 per year for state highways. Are you willing to keep paying that, just so that Oregon looks big on a map? Oregon’s state government is not funded by property taxes. The health of the state budget is determined by the average income per person, not the amount of territory. Corporate taxes are a very small part of state revenues. As far as the state budget is concerned, people and their incomes matter – not land area. The only thing Oregon has to lose is the satisfaction of seeing a large footprint when they look at a map.

2. END THE GRIDLOCK in the Legislature: Without these counties, Republicans in the Oregon Legislature would no longer have the numbers to deny quorum by walking out or slow the legislature by forcing bills to be read in full.  Oregon would make progress, becoming more liberal than Washington state, although not as liberal as California. No Republicans would be added to the US Senate or US House by this change. The effect on the electoral college would only be one elector out of 538, or less than 0.2%.

4. PEACE and HARMONY: Moving the border allows each side of the state to get the kind of governance that is desired by the majority of local residents, by not holding eastern and southern Oregon captive against its will, and letting their votes no longer affect Oregon elections. 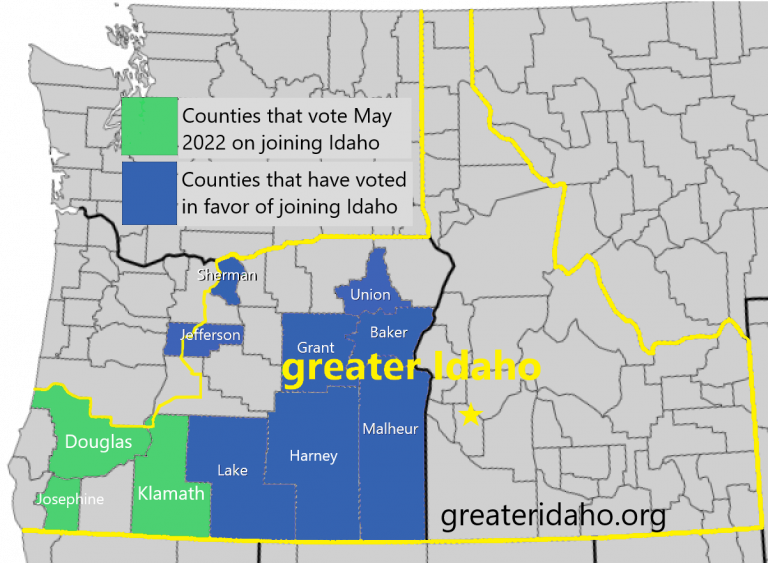 We need your help to move the border!

GET iNVOLVED
Learn More
Get Emails

This is the site of both Citizens for Greater Idaho and Move Oregon’s Border, the two organizations that created and serve the “greater Idaho” movement. We promote the idea of creating a greater (bigger & stronger) Idaho so that conservative counties can become a part of a red state. We started from rural Oregon, but our movement now includes progressives and conservatives of northwestern Oregon who welcome a smaller Oregon, as well as Idahoans, Californians, and Washingtonians.